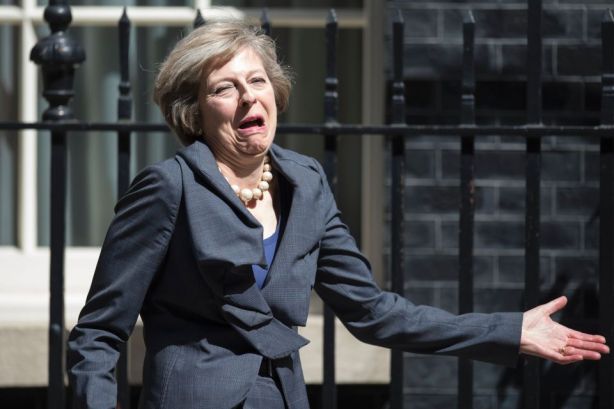 People should have known they were being played for fools when Cameron said “the British people have made a very clear decision….” In reality, under 52% of Britons voted to leave the EU in a non-binding referendum. Think about that, because apparently nobody has in these last 5-and-a-bit months. Less than 52% voted to leave and they only represent 37% of the total electorate because 13 million people did not vote at all. There was only a 72% turn-out and roughly half voted on each side.

So why are people like Cameron and Theresa May so adamant that “Brexit means Brexit”? Why is it only now that the High Court has reminded people that the UK constitution ensures, as lawyers have said all along, that parliament has the final say? Why is a government that largely wanted to remain in the EU putting on this ludicrous show of suddenly needing to uphold the will of the people? Is anyone stupid enough to believe that they care about the will of the people? They refused to allow Boaty McBoatface because of the extreme gravity of naming a ship, but they are honour-bound to redefine international and domestic relation drastically because of a small margin in a non-binding referendum? I do not think so.

17 of the 23 members in the current UK government campaigned to remain in the EU and yet now they are staging a farcical spectacle of girding their loins to fight valiantly for something they don’t want. Brexit Secretary David Davis even upped the hyperbole stakes by claiming that the leave voters had given the government the “biggest mandate in history”. Meanwhile, the most Brexity person in the UK cabinet is the outwardly oafish Boris Johnson, who recently claimed that Brexit will be a “Titanic success”. The obvious thing for people to do is feel good because the buffoon man said something dumb and it feels great to be superior to the idiot toff. But this is a guy who won a scholarship to Eton, won prizes there for English and Classics, and went on to become President of the Oxford Union. Maybe it is a blunder or maybe a Freudian slip, but we must always consider that it could be a witticism. Regardless, he is giving people what they want to see, and every time you laugh at him he is laughing twice as hard back at you. Every time you misunderestimate him, it feeds his contemptuous sense of superiority and power. But I digress….

Some in the government may be genuinely in favour of leaving, but if you think you know what lies in the hearts of people like Boris Johnson then you are fooling yourself. Collectively it should be clear that the exaggerated and silly pantomime currently being played out by the government is little more than B’rer Rabbit theatre meant to bamboozle B’rer Pleb (the public) that they are working incredibly hard and desperately want to get out of that nasty European briar patch. Ohhh, the pain of being held back by that sticky tar constitution and some nasty judges! What can B’rer B’rexit do against secretly European judges, one of whom is an “openly gay ex-Olympic fencer”?

So what is it all about then? Part of it, at least, is that the art of Western politics has now largely become the art of convincing people to be grateful and relieved to have their face stamped on by a boot covered in dog shit, or to blame themselves if they end up having their face stamped on by a boot covered in cat shit. This is also the essence of the current election campaign in the USA. Stupidity, greed, hatred, parochialism, ignorance, self-righteousness and, most importantly, fear are being harnessed to make people feel that Clinton’s presidency will be a lucky and narrow escape. Trump does a very good job of giving substance to those feelings. Alternatively if he does end up as President the blame, like that for Brexit, will be left firmly on the shoulders of the ordinary people. As with Brexit and the Colombian civil war referendum some elites will quietly but pointedly indicate that this demonstrates the dangers of democracy.

The UK has been offered two highly repugnant options by it rulers. One is a self-destructive Brexit that is already causing economic disruption, not to mention making the UK a laughing stock and further fueling Scottish secessionism. The other is a Bremain that means people have no right to complain unless they are xenophobes or take the David Cameron position of claiming (like a posh Trump) that the deal is bad and pledging to send the best negotiators to get the best deal out of those cunning foreigners with their greasy unboiled non-Anglo-Saxon ways. Never mind the actual substantive reasons to hate the EU: the inescapable neoliberalism wracking the poor and vulnerable and creating inequality and disastrous social exclusion. Never mind the gulf between the European Commission and the democratic voice of the peoples of Europe. Never mind the clear sentiment against neoliberal “norms” that are embedded in EU governance. Those things only matter to agitators and uppity proles. Real politics is the art of the possible and from an elite perspective the only thing possible is a finance-friendly fiscally-responsible slow painful descent into a new dark age. The elite conversation is dominated by the excuse that “the strong do what they can and the weak suffer what they must”, as evinced by this charming person who reviewed Ken Loach’s I, Daniel Blake:

Underwhelmed by I, Daniel Blake. Preachy and poorly made. A povvo safari for middle class people. REVIEW https://t.co/pZiVxnfSS9

A proper Brexit would have been a reclamation of popular sovereignty. It would have been an ultimatum to Brussels emanating from the grass roots: we will no longer comply with these unjust impositions, if you don’t like it then you can do the Brexit. I am being a little ridiculous, of course, because before they can reclaim democracy from Brussels, the UK people would have to reclaim it from the City of London. The obvious answer to this and other impediments that make a left-wing Brexit a current impossibility, is to remain, at least for the time being, and trying to work in solidarity with other Europeans to reform the EU, to make it democratic and to cleanse it of neoliberalism.

I remember now! Yanis Varoufakis launched a European democracy movement just this year, but it was soon overwhelmed by the screaming and shouting over Brexit. Whether you think that Varoufakis has the answers or not, he is at least addressing the problem. Yet no possible solutions to real problems can even be heard over the insincere bellowing of scumbags who want to make people choose between gouging out their own eyes and injecting themselves with syphilis.

The latest episode of Westworld had a quote that, although aimed at the ultraviolence on our screens, also works for the political discourse in this well-spun world in which we live: “They create an urgency and a sense of danger so they can strip us down to something raw, animalistic, primal.”

So now we know. Brexit does not mean Brexit, and Project Fear did not die with the referendum. It may not have the same claims of immanent nuclear annihilation, but it is a nagging fear, and the urgency they build is now to end the suspense. Get it over with. That is the point of this current Brexit kerfuffle and drama. With neologisms like “remoaners”, “regrexit” creating a rising tide of twaddle all around, people have rather unsurprisingly started to shuffle back into the remain camp. Polls suggest now that 51% want to remain. The most surprising thing to me is that it has taken so long and shifted so little. Between the polls and the reminder that it was always going to be decided in Parliament, Theresa May and her Voltairesque high-principled crew will now be able to defend “democracy” with every ounce of their vocal chords until they are pulled kicking and screaming back to where most of them campaigned to be.